We half expected the hot weather to continue and it did!  So our August evening went ahead in the same way as the July one with the doors flung wide open and the hall became a cool pleasant place to be.  We had the usual club business and I was pleased to note the members attending had grown and was getting up to normal numbers.  After our Chairman's remarks I took the opportunity to go over the rest of the year's evening speakers and outlined some of the subjects to expect next year.

Clive was on the go, gathering names for the various tasks and jobs during the exhibition, I am pleased to say that there was an excellent response and I personally have a small warm feeling I did not have before! 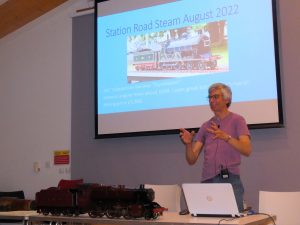 Now our first speaker was long time member Roger, from my point of view he has a problem!  He so under values his own ability and talent!  Roger is the society member who goes out, to mainly widows it must be said, and gives them an idea of what the loco in a box in the garage is worth.  And it was this talent he demonstrated in talking to us this evening.

Roger had prepared his talk on his laptop and this was plugged into the hall's IT system which went to the ceiling mounted Image projector and then to the large screen for all to see. We learnt of his thought process and the need to be able to take an objective view of a particular loco.

Roger speaks from a wealth of personal knowledge of previous sales and observations of what makes a good loco.  The detail that we might overlook may be the tell-tale sign of condition and good or poor construction, perhaps some look just too good, maybe they have never been in steam?

Roger can look at a loco and as he does maintenance and repair on his own locos he has much practical knowledge at his fingertips.  He illustrated his talk with various locos and pointed out some dodgy areas but also some good ones which all affect the value of a loco.  There are some bad practices like threading fittings directly into a copper boiler which raise a warning sign.

One club member asked what was the value compared to a new price.  Roger pointed out that most locos were built by club members just like us.  So the small detail can point to good workmanship and steam test certificates to past history.  He also suggested some questions you might ask like 'Why are you selling it'? 'When did it last run'? ‘When was it built’?

Roger summed up with the main points and also mentioned that auction values and retail values may differ widely but beware the sellers and buyers premiums.  Some traders can be trusted to not only give an honest opinion but also not to sell you a lemon.  His talk was well received and he supplied some good suggestions of where to pick up further information.

We had a tea break and then we had the answer to the problem Roger had set us and that was to value the loco he brought with him.  He told us the figure which I will not publicise and then did 5 minutes on the separate copper boiler also on show.  Roger went over the number of problems and faults and failures to comply with the accepted building methods   He then handed over to Malcolm who was there to talk about his Mini-Vap steam boat. 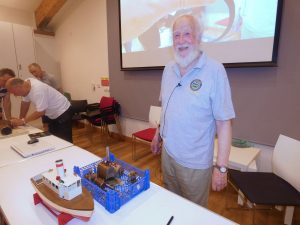 Malcolm went over the class requirements and then told us about the boat he had to hand.  This started as a hull built by a now late friend Jim Brasset, also a past club member.  Jim had made the mould and this hull was laid up in GRP and dispatched to Malcolm.  Just a bit over 20 inches long the hull needs to contain the steam plant and radio control and fuel.  We started with the initial build with the meths burner which had worked well but in this boat the meths container was to have a chicken-feed for the burner to control the supply of fuel.

An unexpected consequence was that the container got warmed by the boiler and the trapped air in the container expanded and forced excessive meths into the burner which then caught alight. Malcolm noticed this due to unexpected increase in speed of the boat!  A speedy dunking solved the problem.  Such is life!

So a new boiler was designed and built but with gas firing.  The gas container is a pressure vessel and Malcolm had made one end from 1/4 inch thick perspex which has worked well over time and gives a visual indication of the contents. The boiler is very sophisticated as it has an automatic water level controller and a steam feed to the gas regulator which can turn down the gas flame when the steam pressure rises beyond an optimum level.

A new twin cylinder double acting steam engine was designed and this was novel in its own way as it 3/8ths bore but just 3/16ths stroke.  Still under development as the self-starting is not yet reliable.  Malcolm explained all and passed around the models for inspection after he had described them

Malcolm also described the operation of the 'Kitchen' rudder which with 2 servos will give steering, speed control and reverse.  Later he explained the Kort nozzle rudder now fitted in place of a rudder.  The new motor has a mechanical reverse built in.
Malcolm asked for questions, there were a few and then we gathered around to have a closer look.  The talk was much assisted by Rob who was Cameraman for the evening and all the images were relayed on the large screen for all to see.

Both speakers received a round of applause for their efforts.  Another members only evening much enjoyed. Thank you to our speakers and to all those who make the evenings what they are.

My measurements are in inches, conversion to the French system is done by multiplying by 2.54.

I leave you with the calculations!