Despite dark thoughts of cancellation, a check around the committee showed a resilient attitude to such minor problems as snow and ice, been there, got the Tee shirt......   and as members kept coming through the doors we felt vindicated by our faith, then there was the nice warm room and the outside was soon forgotten.

We did make an earlier start than usual, I made it 7:31 so let's use this as the new start time, come early etc.

Our chairman said a few words of welcome and also pushed our new subs payment method.  Then he got on to his presentation of the Chairman's Shield and being privvy to the recipient was, I watched as he sat quietly only to be shocked into realising he was the person being talked about!   I dashed for my camera and the result is here. 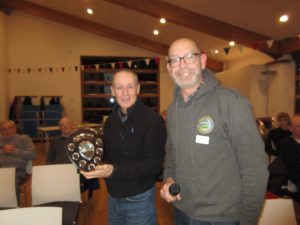 This evening we have Baz operating the IT standing in for Rob who is moving house.

Our talk for the evening was about automata (posh word for wind-up toys) from the late 19th century to the 1960s. Terry introduced himself by showing a Pathe News film of himself taken when he was a young man making a model of the BBC building.  Some years later Terry was approached by the BBC who wished to buy the model to be used as a presentation to John Snagge on his retirement.

Many years later Terry was contacted after John Snagge died and offered the model back, which he was pleased to get returned.  I remember a few years ago Terry was on the Antique Roadshow with the current Presenter and his model was again the subject of interest.

The main subjects in our presentation are wind-up toys and the early walking dolls.  Terry had made an excellent video with each toy explained and then an accompanying one of the mechanism and then the toy in action.  The models came from all the countries with manufacturing facilities. USA, Japan, Germany and the UK.  Tinplate being the norm and lithograph printing the decoration.

The production of toys had stopped during WW1 as small guns and munitions were the temporary products.  When the war ended it was back to finding something that would sell and toys were the easiest and although the mechanisms were crude they got more complex and as technology moved on  sound was introduced on some.

The toys varied from wind-up toys to games to bet on like the many horse racing ones, also gyroscopes were regarded with mystery and were at the heart of several of the toys.  And there were many to see as well. Timewise we got as far as battery operated ones including a rowing boat and a railway and a car race track.

Terry finished with a 7 minute video of his father in law's model railway, a fascinating and large collection of trains on 3 different gauges G1, O and OO.  All running together in his loft.  We closed with a nativity display from Africa all made from scrap bits of metal and glass.

Terry received an appreciative round of applause for a very interesting talk and a very well-crafted visual / audio presentation.

We then had a break for refreshments, hot sausage rolls and spring rolls with other hot items and crisps, cakes and biscuits and then a slice or two of Malcolm's own cake.  Must not forget our movement up market into china mugs and plates, no more plastic beakers and plates for us now!

I took the opportunity to give out some joining packs to new members and having a short chat with them.  We are starting up again our welcome to members scheme to make sure we can pair them up where possible to another member with similar interests.

Clive called us to order for the raffle, Kevin had earlier pinned us down and demanded payment for tickets, (but nicely).  He raised £151 for club funds so now we have him in training looks like just a bit more practice next year and he will be well qualified.  The tickets were well worth buying as the prizes were very nice, so thanks to the membership for all your contributions.

Clive took over for the raffle, he selects the item and then a ticket is drawn etc.  Now me being as I am, had within the space of one hour lost my tickets!  Mind you, not unheard of these days either.  So when one of my numbers was called I said Yes, I but have lost my ticket!  It was quite touching the way that Clive trusted me!  I did find them a few minutes later and showed Clive the number called.

We had decided not to keep members too late with our festivities so we wound down around 10 to 10.  Many thanks go out to the refreshment team, Irene, Barbara and Annie with Jack and Neil on the tea and coffee.  Thanks to all those putting out and later replacing the tables and chairs, our appreciation goes to Terry for an interesting talk and to the membership who turned out on a really cold night to share another enjoyable club evening.  I left around 10 and noted my car showed -2.5 degrees C on the roads.

Next time... well there is always one these, these days!  We have a film show and payments can be made for 2023 subs, still the same as last year and all welcome to come.  See you all next year.