We had a good turn out of members mid 30's I think, and our first item was the EGM.  We talked about subs for next year and hall fees, there was some discussion and various views were noted.  The vote at the end carried there may have been an abstention so the subs and hall fees stay the same for 2023.  The EGM was closed. 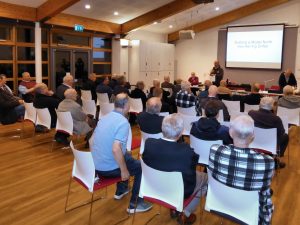 The club evening commenced and our Chairman expressed his thanks to Michael and the G1 team for completing the main part of the G1 project.  They all received a well earned round of applause.

We moved on to the immediate situation at the Puffing Park and the council visit, it needs resolving to make our own club use of the land clear to all, and approved by the council planning people.

We proposed starting the evening more promptly at 7:30 which was generally approved of.

The Christmas evening was open to wives and a few invited guests and we shall have a talk on Automata in dolls and models from the past. Our own expert on the subject has a one hour talk planned and then food and the raffle. 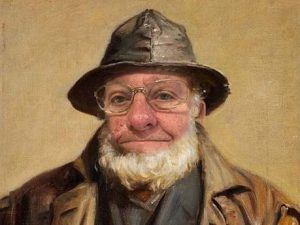 Our speaker for the evening is another club member Mike Grossmith .  Mike (seen here in traditional trawlermans attire) has been building a Herring Drifter model and quite a large one so that he could incorporate a steam plant.

First he showed some videos of the fishing boats in operation from You tube source and then outlined the Herring fishing industry in the North Sea from its start over 1000 years ago, this was run by the Scottish and as the herring slowly migrated down the coast from the North so the ladies who gutted and stored the fish in barrels, followed the fishing boats down the coast.  Much of the catch was exported to Europe and Russia. 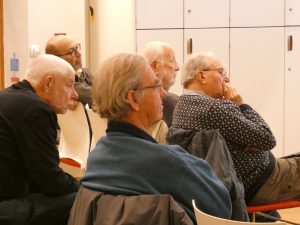 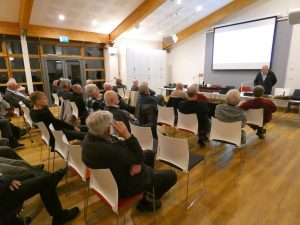 Mike described some of the ways of the ladies there were as many as 10,000 at the height of the industry between the wars but gradually the toll on the fish stocks became too much and the fishing business dropped dramatically.  There was a period during WW2 when the fish stocks picked up and then there was a moratorium on fishing in the late 70's for 5 years.  Of the old type trawlers there are just 2 surviving, Lydia Eva and another in Lowestoft. 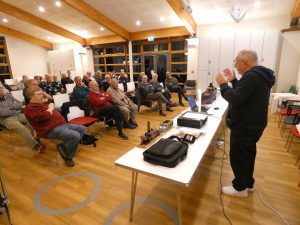 Mike had various photos from visits he has made over the years to Great Yarmouth and Lowestoft, these showed the Lydia Eva in its sorry state and then as it was being restored to its current condition of being in steam and registered to carry visitors although you may have to 'work your passage' hauling ropes etc.  She has a triple expansion engine and a relatively small boiler but is in steam and that is the main thing.  The fish holds have been transformed into welcome spaces.

We had a break and afterwards as Mike had not been able to access another proposed video I volunteered to fill in for 10 minutes with a promo for the current TV series called 'Trawlermen' and outlined a modern fishing trip from 2021 and the technology on board and the contract to supply 250 tons of Mackerel at the destination.  This later was sold to Japan for Sushi!

Mike to the stage again and he outlined the building of his model, it is based on the book 'From tree to sea'  and the kit originating from Marvon Models sourced the hull with all the superstructure information based on the book and visits to the boat at Gt. Yarmouth.  He took us through he detail and what the purpose was of the fittings and how they were made.  There are over 1000 rivets real but not functioning all very neatly spaced out.  The rest of the build had been carefully observed and detailed into the model also having to allow for adequate airflow to the gas powered steam plant below. 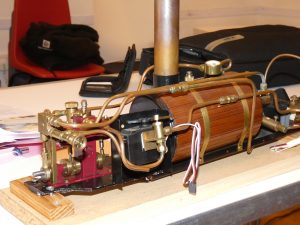 Mike went over the lift-out steam plant based on Cheddar models Puffin twin unit and using a Cheddar designed boiler water level controller utilizing the water pump attached to the engine.  This unit works by monitoring the water level as shown in the sight glass.

Mike had been answering questions as he progressed through the evening so there were few left to ask at the end.  Our Chairman thanked Mike for his entertaining talk and he received a good round of applause.

The usual crew cleared up the chairs and stored away the tables all appreciated by the rest of us and thanks go to our refreshments crew who always deliver and we all went home!